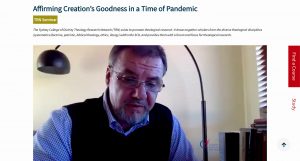 Lessons from the Pandemic

“People who have not been in Narnia sometimes think that a thing cannot be good and terrible at the same time.” C. S. Lewis, The Lion, the Witch and the Wardrobe (The Chronicles of Narnia 2)

The early Christians might have lived in a “precritical age,” as we judge them, reassuring ourselves, but they were by no means uncritical, unwise, and undiscerning. Their sense of reality in all its complexity was sharper than our own, which explains why they could both assess things and handle crises better than we do.

People might feel uneasy about these opening lines, desiring to contradict me. Of course, they are free to do so. However, before they do so, let’s just think of how the “first world” reacted to the unfolding crisis of the coronavirus pandemic. From the irresponsibility of certain leaders, political and ecclesiastical alike, to the tragic loss of life registered in their very countries and elsewhere, down to the restlessness of our own compatriots who are ready to die for a night out or a “big family” reunion, the “first world” displays traits of what I can only call childishness, blindness, and stupidity. We may reassure ourselves as much as we like, but the evidence stares us in the face. We behave like restless children unable to take a break from our frenzied—and, more often than not, pointless—activities, to breathe in, to breathe out, and to look into ourselves realistically, in a moment of peace. While the lockdown could have been used for reflection, by and large it did not happen. Either way, irresponsibility and restlessness are a match made in heaven, and they do not lend substance to our reassuring image of ourselves as the mature exemplars of a “critical age.”

Above all, irresponsibility and restlessness make plain our lack of preparation for the possibility of the unexpected. We all heard of an earthquake here, a tsunami there, and a catastrophic storm yet elsewhere; we all heard of famine, war, pestilence, and death. But none of it concerns us, for we live in the perfect world—“the land of opportunity” and “the lucky country”—where none of it seems possible. It is at this juncture that becomes obvious the third element of our “first world” algorithm, namely, our unreasonableness. Irresponsibility, restlessness, and unreasonableness. From wishing one another “all good things” to expecting only good things to happen is a far cry, yet we still do, that is, we do expect all good things to happen. I propose that our unreasonableness, together with its mates, irresponsibility and restlessness, have their origin in a shallow worldview. As it happens, Christians and secular people are no different on this count: while drawing on their respective assumptions, both present the symptoms of the same health issue (pardon the pun).

Apart from considering with suspicion people’s blind trust in the system which serves us from the beginning of the modern era—especially our technological capability to bend things according to our own designs—I would not presume to understand the secular mind and the agnostic take on reality. Bearing in mind this caveat, I tend to believe that it is this misplaced trust in the system’s knowledge and power that fooled “first world” people in the early days of the coronavirus outbreak, as it did on many other occasions. There is, indeed, a downside to the system we created and to the mindset it inspires. Blind trust in the system dulls people’s wits, blunts their discernment, making them irresponsible and unreasonable in their expectations. And people expect only good things to happen, as the enemy, that is, nature, is being brought to its knees by our technological might. But the secular optimistic narrative has serious flaws; it is shallow, a sandcastle and a house of cards. Knowledge and power keep letting us down, the system cracks. It happened in the past and it happens under our very eyes. And when the system fails, “first world” people are left as they are—utterly unprepared, both psychologically and emotionally. Hence their restlessness and irresponsible reactions to the ongoing crisis.

What I might understand better is why certain Christians, who in theory have faith and wisdom to guide them, behave as unreasonably as their secular and agnostic neighbours. It seems to me that they infer the wrong conclusions from the doctrine of creation. Specifically, many believe that God, whom they represent as the sum of all possible perfections, had created the best of all possible worlds, and that, consequently, there is no place for bad things to happen. If bad things do happen, they happen to sinners, rightly so. In turn, the righteous have no reason to fear and can merrily go by their business as usual. And, of course, at the end of all things, they will necessarily go to “heaven.” No room for bad news. No place for the unexpected in the worldview of the righteous. Just winged angels and apple crumble pies. And if sometimes the righteous remember the fall of each and every one of us—for we all fit the bill of our paradisal forebears to a tee (Romans 5:12)—their misguided faith in the Lord’s salvation prevents them from assessing things realistically. No wonder “people who have not been in Narnia sometimes think that a thing cannot be good and terrible at the same time,” as C. S. Lewis characteristically had it. In short, blind faith renders most Christians as unprepared for the unexpected as trust in the system and technology does their secular and agnostic neighbours.

Not so the early Christians. For them, the only good news was the Lord’s unwavering love (Romans 8:38-39), not earthly rewards for righteousness. What they expected were not peace, good health, and prosperity; instead, they were to face afflictions, hardship, distress, persecution, famine, nakedness, peril, and sword (John 16:33; Romans 8:35). They knew, furthermore, that the creation itself—while scarred by people’s sins—still journeys towards perfection, its future glory (Romans 8:18–23). They realised that the world was imperfect. A paradox! The creator’s perfection did not result in a perfect creation.

In the third century, Origen of Alexandria (d. ca 254) fought hard to prove that the imperfections, the disparity, and the suffering present in the world were our own doing, our sin, not a natural defect of the creation (On the Principles 2.9.4; 2.9.6; 2.9.7; 3.1.1–24; 3.5.8). While this approach seemed justified to him at the time, and later to a series of monastic authors, it has not been widely accepted. A century later, Athanasius of Alexandria (d. 373) was among the first to point out that the material stuff of the universe is by nature incapable of perfection, whereas the creator calls the creation to inherit charismatic immortality (Against the Gentiles 41–42.). His position seems to have expressed the view of many early Christians, who did not expect the creation to be the best of all possible worlds. As we read in the New Testament, “here we have no lasting city, but we are looking for the city that is to come” (Hebrews 13:14). It is this awareness of the universe’s ontological imperfection, together with its dependence on God’s permanent activity, which led the early Christians to appraise things realistically. Thus, on the one hand they did not expect only “good things” to happen in the world, but on the other hand they remained free of fear. On both counts, the reactions of contemporary Christians and secular people alike are equally inferior, as they oscillate between irresponsible confidence and the depths of fright and despair.

Against this backdrop, for the early Christians nothing was unexpected, good and bad alike, and people, knowing it, were not unreasonable and unprepared. They perceived an ambivalence about God’s creation: while some things in the world are straightway good and useful, some not so much, their wildness going as far as endangering humankind’s safety. If they aren’t dangerous, they at least seem useless. However, several early Christian thinkers endeavoured to show that even overtly nasty things—such as poisonous plants and substances, or venomous insects and animals—can be put to a good use through medical research and applications. Among the promoters of this view are Basil of Caesarea (d. 379; see Homilies on the Hexaemeron 5.8), Gregory of Nyssa (d. ca 395; see On the Constitution of Humankind 7), John Chrysostom (d. 407; see Homilies on Genesis 10.12,13), Theodoret of Cyrrhus (d. ca 458; see Questions on Genesis 10, 18).

One might wonder what has all this to do with the coronavirus pandemic. I believe that it has, that it is relevant to our current concerns and worries. Whether we like it or not, this virus, this invisible enemy, is part of God’s creation. It might have mutated from some possibly benign ancestor—or it might have been there all along, and we did not know it. Or it might have been produced by our crafty hands, always ready to play with the fire hiding at the core of nature. One thing we know, namely, the “first world” made possible for this enemy to reach out everywhere. We are unreasonable, irresponsible, and restless. We travel everywhere, we play with things, and eat all things—just because we can and “because we’re worth it.” And then we all suffer the consequences, for, as our political leaders keep telling us, “we are all in this.” Unfortunately, more than the “first world” culprits suffer the innocent many from the “second world” and the “third world,” who cannot afford to travel and to eat and to do everything. The enemy reached them because of us, cosmopolitan travellers.

The current health crisis reminds us of the early Christian discussion of creation’s wild side whose dangers our sins increase. The great difference between the early Christians and us is, we saw above, their realism and our own unpreparedness for life. They knew the many facets of reality. In turn, “people who have not been in Narnia sometimes think that a thing cannot be good and terrible at the same time.”

Is there anything good, therefore, about the coronavirus pandemic? There might be. Take for example the cleanness of the atmosphere after the lockdown, as international travel and trade were on hold. Or the heroism of the health workers. Or the moving expressions of human solidarity of which we have learnt in the last few months. Take also the disclosure of certain political and ecclesiastical leaders’ stupidity and irresponsibility. Yes, lives have been lost; life is precious, and hopefully the loss of so many lives taught us something about its true worth. Perhaps we all learnt a little more about the weaknesses of the system in which we put our trust, and about the misguided faith of those who expect only good things to happen in the best of all possible worlds. Perhaps, furthermore, people steeped in natural contemplation found theological insights behind this tragedy. I hope that what they discovered is that the world is good, with its patches of light and dark, regardless of the extent of the crisis. Largely, though, this remains a lesson whose wisdom we are yet to grasp.

This essay is an edited excerpt from the paper ‘Affirming Creation’s Goodness in a Time of Pandemic: Patristic Insights,‘ presented on 28 May 2020 for the seminar series Theologising in the Shadow of a Pandemic, an initiative of the SCD Theology Research Network. An edited version of this text can be found on SCD TRN’s webpage.