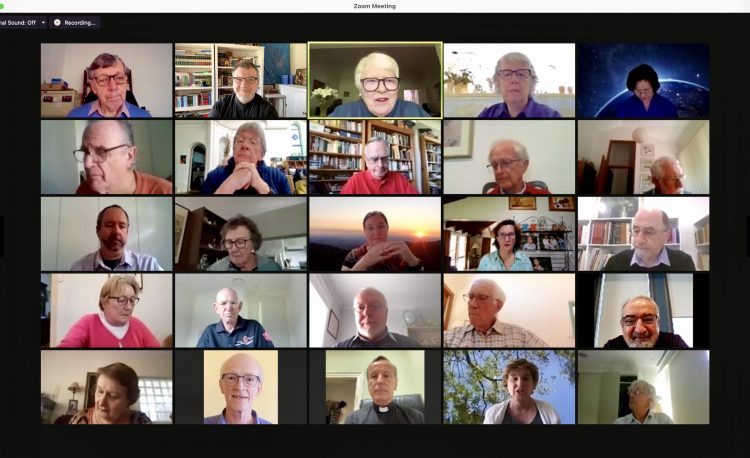 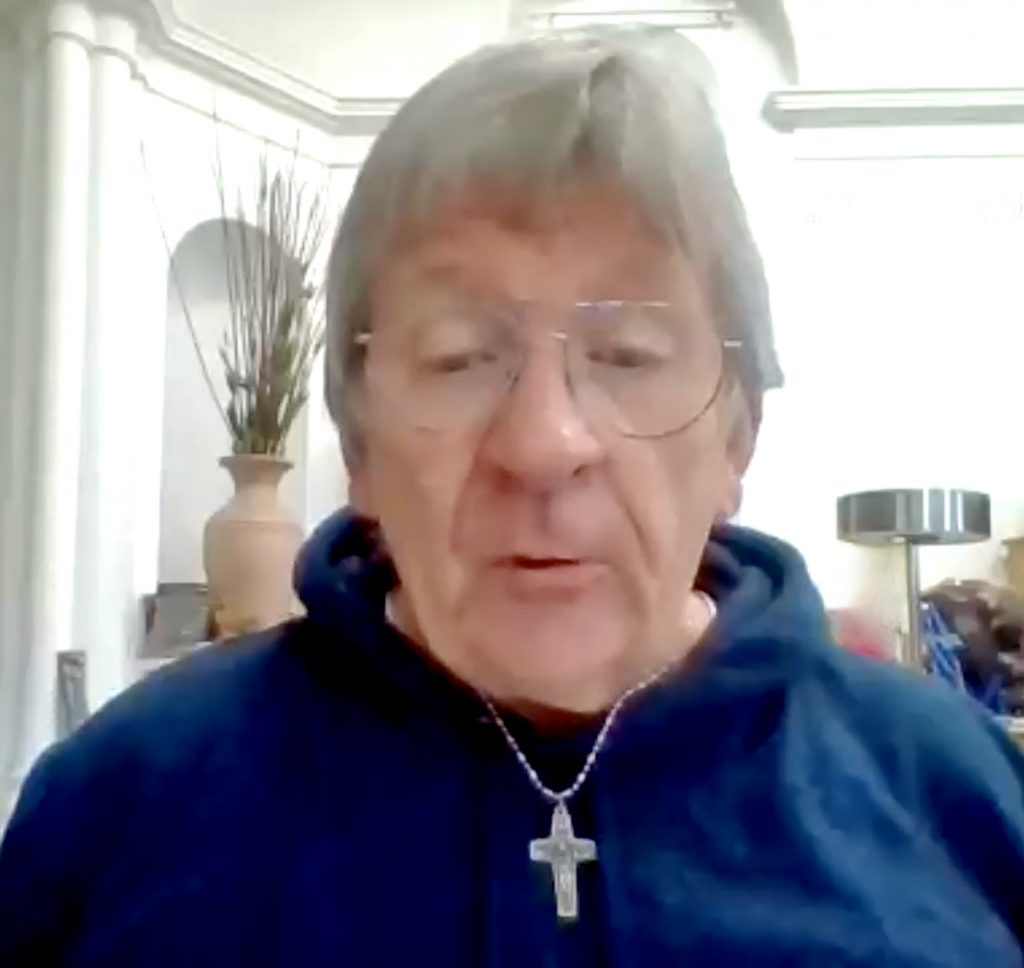 Ut unum sint synthesises the Church’s journey through its history. It appeals for a response to Jesus’ prayer and desire for unity among his followers. It calls for a dialogue that prioritises discovering and receiving the riches of others (Samaritan Woman, Syro-Phoenician Woman, Cana Wedding, and the Uluru Statement from the Heart) and breaking down walls of division and distrust, overcoming obstacles and prejudices, eliminating hurtful words and expressions, choosing the path of humility, meekness, and fraternal generosity. Ecumenical dialogue according to Ut Unum Sint is not about comparing teachings and practices, but an “exchange of gifts” between the Christian churches. We have the one heart that loves and speaks, and many voices that make it present.

I was born and raised in a mixed marriage of migrant parents. My mother was a Lutheran from Germany and my father a Catholic from Poland. There was no suspicion of other denominations. It seemed to be more outside the family. My encounter with people from other denominations over the years has made clear that being a Christian with others dwarfed any of our differences. I have been nurtured by thinkers such as Thomas Torrance, Rowan Williams, C. S. Lewis, Paul Tillich, Dietrich Bonhoeffer, Jim Wallis, and Jürgen Moltmann. Alongside my Catholic community, my faith has been anchored in encounters—one of which has been the NSW Ecumenical Council Peace and Justice Commission. Here was not abstract ecumenism, but a framework for sharing God’s message of incarnate love for all in Jesus. I learnt that we cannot indulge in any kind of parochialism, racism, nationalism, or exclusivism, even though we may, at times, be complicit in systems of violence, injustice, militarism, racism, intolerance and discrimination. Hence, the challenge of justice—right relationships—that contributes toward reconciliation and unity. Inclusivity, believing intensely in and abiding by the oneness of humanity.

Since becoming Pope, Francis has consistently militated for developing a “culture of encounter,” more through gestures than by talking about it. He has said very little about ecumenism, but has done much through ecumenical gestures and cultivating relationships with the Orthodox, Evangelicals, Pentecostals, and Lutherans. Witnessing through gestures is of greater importance. For example, when asked by a young person during World Youth Day in Krakow 2016, “What must I say to my friend who does not believe in God? How do I convert him?” Francis replied, “The last thing that you must do is to say something. Take action! Live! Then, seeing your life, your witnessing, the other one will perhaps ask you why you live thus.” It is in the area of peace and justice that the God of life calls us to “let the suffering speak,” from the earth and suffering, colonised, excluded, marginalised, and discriminated against people. This is a preferential option for the poor. It is a call to go public by building bridges and speaking the truth beyond our walls. There are many contrary examples of structural violence—either weapons or physical force, or merely tolerating widespread poverty, humiliating treatment of the stranger, trade disparities and inequality where vast amounts go to military spending and a pittance to the eradication poverty, hunger, and sickness.

Ut unum sint uses the word “dialogue” often. The dialogue of love, as Ut unum sint suggests, points to a collaboration in commitment to “freedom, justice, peace, and the future of the world” where a “united voice” inculcates “respect for the rights and needs of everyone, especially the poor, the lowly and the defenceless” (cf. Matthew 25: “I was hungry and you gave me food…”).

Pope Francis seems to take this further through gestures. And this has been picked up by a number of contributors to the book published last year, A Celebration of Ut unum sint: The 25th Anniversary. Pope Francis (in his Apostolic Letter Evangelii Gaudium, 2013), devotes only three sections (244-246) to ecumenism. He emphasises the common witness for peace in the world. Its starting point should not be our differences, but the common faith. There are recurring themes that relate to ecumenical relationships and the unity among Christians, namely dialogue, encounter, journey, the model of unity as “reconciled diversity,” and an “ecumenism of blood.”

Dialogue is essentially an encounter and conversation, a matter of speaking and of listening. Francis says that “To dialogue entails a cordial reception, not a prior condemnation. In order to dialogue, it is necessary to know how to lower the defences, open the doors of the house, and offer human warmth.” This culture of encounter is the foundation of peace. It is not about convincing the other of one’s own deeply held convictions, but about deeply understanding the other. Each speaks from a personal context, and from a personal perspective of the world. The approach must be one of humility without sinking into the toxic, demonising, and demoralising rhetoric of much of current politics. Thus, the Church does not engage in this dialogue with ready-made solutions (Evangelii Gaudium 240).

Dialogue entails an encounter and then a journey together. He continues by saying the following:

We must never forget that we are pilgrims journeying alongside one another. This means that we must have sincere trust in our fellow pilgrims, putting aside all suspicion or mistrust, and turn our gaze to what we are all seeking: the radiant peace of God’s face (Evangelii Gaudium 244).

In the same being, in his 2014 Message for World Communications Day, Francis added:

The walls which divide us can be broken down only if we are prepared to listen and learn from one another. We need to resolve our differences through forms of dialogue which help us grow in understanding and mutual respect. A culture of encounter demands that we be ready not only to give, but also to receive.

When he refers to “unity in reconciled diversity” (Evangelii Gaudium 234-237), Francis comments: “In ecumenical relations it is important not only to know each other better, but also to recognise what the Spirit has sown in the other as a gift for us,” and “We must walk united with our differences: there is no other way to become one. This is the way of Jesus.”

Referring to the “ecumenism of blood,” Francis writes:

Francis talks much of fraternitas as the expansive bond between people. It is a disposition or value we put on relating to other people, including strangers and those very different ideas from us. It prioritises relationships. It means caring for people regardless of their identity or their affiliations, and reflects our fundamental interdependence and connection. As St Francis crossed many borders and built many bridges with people, Pope Francis calls on all his brothers and sisters, regardless of their religious tradition or nation of origin, to “see things in a new light and to develop new responses” to the challenges before us (Fratelli Tutti 128). There is an increasing tendency to erect borders and walls that separate, isolate and exclude the other, often the most vulnerable in our world. For Francis, love is the necessary ground for our building a “culture of encounter,” which “means that we, as people, should be passionate about meeting others, seeking points of contact, building bridges, planning a project that includes everyone” (Fratelli Tutti 216). Apathy and indifference not only block our capacity for compassion and for being in solidarity with others, but also promote an individualism that creates separation and prohibits authentic relationship. The ones who suffer the most are the poor and vulnerable.

Toward the end of Fratelli Tutti, Francis writes:

In many parts of the world, there is a need for paths of peace to heal open wounds. There is also a need for peacemakers, men and women prepared to work boldly and creatively to initiate processes of healing and renewed encounter (225).

In the final chapter of the encyclical, the pope appeals to all religious believers, regardless of their tradition, to be agents of reconciliation, recognising the fundamental commitment we all have to promote the common good. Commitment to Christ’s Gospel is of the essence in this regard.

Thus, in Evangelii Gaudium Francis calls us to a renewed personal encounter with Jesus Christ, or at least an openness to letting him encounter us (3). God reaches out to us in the hope of a response that leads to a society and a culture where we can encounter each other and the living God. This culture denounces situations and systems that marginalise people. Accordingly, Francis criticises a system that obsesses over some stock market downturn yet ignores the death of a homeless person. The poor are of particular importance because they are the most ignored and seen as the most dispensable. To encounter the poor person is quite literally to encounter Christ. This encounter has macro-social and interpersonal implications, underscoring the humanity of the other.

As well as denouncing injustice, the prophets of encounter also proclaim the goodness of human relationship. Encountering another is to realise their inherent human dignity and the privileged place of the poor. On Pentecost Sunday in 2014, Francis noted that in stepping out of ourselves, we can see that other people “have something in common with us: they are images of God, they are children of God.”

A final point about the culture of encounter is the value it places on mystery. When we look at our home—the Earth—we see the world as the place where God is present all around us; we see that we are connected to each other through visible and invisible ties. God is present in each and every person who manifests God’s love in ways only she or he is able. The spirituality of encounter, while it critiques certain aspects of society and human relationship, at its core is a realisation of God’s immanent presence and an acknowledgement that we experience the love of God together with other people. This culture of encounter moves us to walk the journey of our lives tenderly holding each other’s hands, knowing all the while that it is Christ who is our companion.

Fr Claude Mostowik is a member of the Missionaries of the Sacred Heart, President of Pax Christi Australia, and Co-Chair of Peace and Justice Commission, NSW Ecumenical Council.

Acknowledgment: This paper was presented at the online conference “What Does It Mean to Be Ecumenical?” organised by the NSWEC’s Theological Reflection Commission, 9 October 2021. For details about this conference, see this news item.