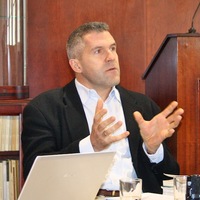 Until recently, the tradition of western philosophy widely accepted as normative Aristotle’s definition of the human being as a ‘rational animal.’ Whatever its weaknesses, the definition had real plausibility. Human beings are animals, that seems certain. They eat, mate and reproduce; they form groups and tribes; they defend territorial boundaries; they rally their resources for food and survival. But running through all this, human beings are also rational: they plan and scheme; they calculate and judge; they wonder and pray and philosophise; they are not determined by instinct and physical laws alone, but transcend them in self-possessing, self-determining freedom, holding themselves accountable for their actions and thereby implying a moral capacity to overcome the imperious demands of sense, space, and circumstance.

But even Aristotle knew that this index did not exhaust the full range of human capabilities. While he credited the human mind with remarkable powers for mathematical and scientific abstraction, he never altogether rejected the more Platonic insight that human beings are open to the divine, and thus that their greatest perfection lies not in rational action, but in some kind of spiritual receptivity to God. The highest human acts are not really human acts at all, except in so far as one can call ontological openness to a gift an act. This openness to receive from God, to participate in the world of the divine, is essentially a trans-rational inclination. It lies more at the level of affect and passion than the level of thought and will. As Josef Pieper explored in a characteristically erudite essay on the theme, Socrates referred to the fulfilment of this ontological eroticism as theia mania, the experience of ‘divine madness’, a state in which the highest goods come to us in the manner of a divine gift. For the human so blessed, the experience consists in a kind of loving going out of oneself to God, an opening up of oneself to his beauty, a surrendering of oneself in enchantment to a divine presence and promise which alone can fulfil one’s humanity (Pieper 1995).

From the perspective of pure reason, such a state cannot but look like a sickness of mind, as the human religious impulse always looks to such would-be rationalists as Karl Marx and Richard Dawkins. But from another perspective, it could be argued that the great malady of our time lies precisely in the lack of this sickness, the incapacity to be beside ourselves with love for God. What else would explain the ubiquitous spread of the rave and party culture, with its almost irresistible lure of transcending the body and reason in alcohol or drug induced ecstasy? It is not bad parenting alone that is to blame, but secular rationalism’s totalising rejection of the spiritual sphere, its failure to respect our essentially ecstatic constitution. The problem is, denying or suppressing the spiritual in us doesn’t make it go away, but only forces its yearnings into perverse or pathological pathways.

So far, then, we have been saying that human beings only fulfil their highest potential in a trans-rational spiritual experience. Human beings are essentially ecstatic beings, commensurately proportioned to receive divine realities beyond the reach of discursive logic and scientific reason. This leads us to a second observation, the one with which I am mainly concerned here, and that is the character of these divine gifts as essentially indefensible, that is, their inability to be rationally defended or justified, their aptness only to be received, experienced, lived, adored. This too is an insight bequeathed to us by Plato’s Socrates, who saw it as a corollary to the fact of our ecstatic constitution.

At first glance, this might strike us as an oddity. Wasn’t Socrates the great father of the so-called socratic method, by which true knowledge is arrived at by a lengthy process of discussion and argument, question and answer, thesis and antithesis, division and judgement, a mode of rational discourse geared towards the elimination of all prejudice and error, dogma and opinion, so that the truth of things, stripped of all extraneous trappings, at last comes to clear light for all with good will to see?

And indeed, still today, philosophers in the tradition of Socrates often lament the decline of just this kind of rational argument in public debate, drawing attention to the eclipse and conquest of reason by rhetoric and emotivism. If only reason were given due place, it is said, then all the clandestine ideologies could be seen for what they really are and social policies could be proposed and constructed on surer footing. And this of course is true, and has eloquently been argued in our time by the likes of Roger Scruton, Alasdair MacIntyre and Chantal Delsol, among many others.

Yet the line we have been pursuing recognises that there are also limits to reason, not least of all when it comes to justifying ultimates. Some things are not liable to rational justification; their goodness is intrinsic, essential. That is what makes them vulnerable: they cannot be proved or argued, they can only be loved and upheld. To offer reasons for them – even if such reasons were successfully welcomed as persuasive – would be to relativise their goodness or necessity, to reduce them to the sphere of measure and calculation. In his book Plato’s Critique of Impure Reason, David C. Schindler has shown that for Plato, it is not knowledge per se that is reason’s real goal, but the real being of things themselves. For Aristotle, knowledge exists in the mind; it is the formal identity of the mind with intelligible reality by having that reality immaterially come to be in the intellect of the knowing subject. But for Plato, to stop there would be to short-circuit the ecstatic trajectory of the human being, according to which our highest act lies in what Schindler calls ‘a moment of expropriation’, that is, not so much in taking the object into ourselves, as in entering ourselves into the object (Schindler 2008: 231). Such a union takes place less at the order of reason and more at the order of love, ecstasy, and affective surrender.

We are talking again about theia mania: divine madness. This is what the highest things call for; not rational justification, not logical dissection and scrutiny, but  reverence, gratitude, adoration. What are these ultimates? Truth, goodness, beauty, friendship, wisdom, love: these at least, among others. In themselves, they are defenceless. Reason stammers before them, embarrassed but above all humbled by its impotence. One can of course offer arguments for such ultimates, and for the reasonability of the human responses appropriate to them. Take wisdom, for example. Why should it be pursued? We know it does not come easily. It calls for personal self-discipline and patience, respect for the living, veneration for the dead. A society serious about the pursuit of wisdom needs to stake out definite spaces dedicated to its cultivation, ‘useless’ space and time unburdened by the normal demands of bureaucratic efficiency and economic productivity. But what kind of reality really justifies such efforts? What makes wisdom that good? Perhaps its possession enhances human life and society. Perhaps it preserves us from repeating old mistakes and from accepting easy but false solutions to problems. We certainly don’t want its opposites, folly and ignorance, twin evils of human advancement. But in the end, at the judicial bar of rational argument, such verbal defences seem almost ridiculous. By trying to justify wisdom and its pursuit in this way, we relativise it, reducing it to the level of means rather than end (Schindler 2008: 238). Were we to find some other way of satisfying our reasons, some other way of reaching our goal, wisdom would be left to fend for itself. In the end, the only way to defend wisdom adequately is by loving and pursuing it for its own sake, by letting its inherent attraction take hold of us, thereby becoming wise and participating in its absolute goodness. Such love may seem to take us out of our minds, but it alone is sufficient to transport us from the confines of our limited nature and into the world of ultimates.

That’s why the best things are the most defenceless. They are just what we need to become fully human, yet they transcend the world accessible to rational inquiry, being able to be grasped only by a nature connatural to their own. Their justification as necessary goals of human life lies not in giving reasoned argument, but in surrendering to ecstatic love for them. It is noteworthy that this is exactly how the Christian tradition has learned to act as defender of good. Impelled by what Saint Paul called ‘the logos of the cross’, the Church has developed a sensitivity for all things vulnerable, recognising in them a real affinity with the crucified Christ, God’s appointed means of drawing human beings towards a wisdom and perfection far beyond anything of their own making. Whether it be courage or modesty, human dignity or sexual integrity, humility of spirit or the worship of God, the Church does best at defending such goods by loving them, by honouring them as divine gifts, by revering them with thanksgiving and living them with conviction and devotion. The way to familiarity with them may involve a certain intellectual darkness; the mystical tradition calls it the way of ‘suffering divine things.’

It is of course possible to defend them by other means – reason, politics, law, rhetoric, even war. And some of these surely have a legitimate role to play. As far as the first goes, every Christian is meant to be ready to offer a reasonable defence – an apologia – when questioned about the rationale of his or her faith, with the important qualification that it be conducted with gentleness and respect (1 Peter 3:15). Rational argument will always be needed to debunk false opinion and remove certain obstacles which prevent people from making the act of faith.

Yet this side of glory reason is rarely pure and unalloyed. Even where it has been purified by faith and love, its utility in intelligibly communicating what it sees presupposes a community of interlocutors possessed of commonly graced wills, holy desires, and motivated minds. In that light, the individual Christian, along with the whole Church, must be prepared to live out this life in what Pieper called ‘a state of silent vulnerability’ (Pieper 1985: 11), convinced of the truth of divine things by a love that knows them ‘from the inside’, as it were, just as one knows a person. And that, after all, is what we are dealing with: a Person. And a person can only be known by love.

Associate Professor Adam G. Cooper is a Permanent Fellow and Associate Dean of Research at the John Paul II Institute in Melbourne.