In the fullness of time, Thursday, before his passion, Jesus had the Last Supper with his disciples in Jerusalem. As Saint Matthew’s Gospel describes, “While they were eating, Jesus took bread, and when he had given thanks, he broke it and gave it to his disciples, saying, ‘Take and eat; this is my body.’ Then he took a cup, and when he had given thanks, he gave it to them, saying, ‘Drink from it, all of you. This is my blood of the covenant, which is poured out for many for the forgiveness of sins’” (Matthew 26: 26-28). Anticipating the Saviour’s sacrifice on the cross, this eucharistic Supper brings forgiveness of sins and eternal life (John 6:54) to all who ever lived or will live.

From the iconographical centre of Nicula emerged a wide variety of representations of the Mystical Supper. From this variety I chose two icons, both dating from the first half of the nineteenth century. 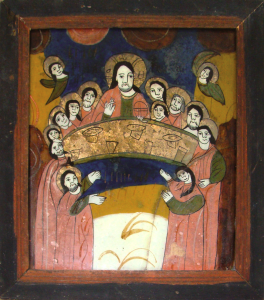 The particularities of this composition are typical for the Nicula centre. The sober, effaced colours and the small amount of nuances (reddish-brown, yellow-golden, bluish-green) suggest compositional unity and stability. The drawing is sharp, placing the onlooker straight into the Supper’s ambience. Jesus Christ is far larger than the other figures, echoing his Pantokrator posture, but his countenance is gentle. His gaze is somehow turned inwards, his face sad. He blesses the disciples gathered there. He holds a loaf of bread in his left hand, which he will soon break and distribute to those present. The bread bears a cruciform mark and, as the Lord’s clothes, is red—soaked in wine, itself denoting the blood of his sacrifice on the cross. In the Church, the bread and the wine have become eucharistic matters. The miniaturisation of certain figures and the particular physiognomy of the disciples shows their diversity and their uniqueness in God’s eyes. In a very original fashion, the standing disciples point to the Lord’s table, but also evoke the ritual dance, the “hora.” In the Romanian village of olden days, the “hora” expressed the joy of fellowship experienced by a community. Ingeniously, the iconographer mixed this folklore element with the Mystical Supper’s otherwise solemn gathering. This element denotes the joy of communion even in dramatic moments, but it also announces the hope which will shine to all at the Lord’s resurrection. Furthermore, it signifies the mystical union between the Bridegroom, Christ, and his Bride, the Church. Another interesting detail is the golden patina of the table, corresponding to the halos, which might suggest that the Church’s Mystical Supper, the eucharistic banquet, anticipates the communion of the saints in God’s kingdom. An intriguing element is the representation of wheat crops in the lower register of the icon, suggesting an agricultural dimension: the eucharist draws on the crops which Christ the Pantokrator blesses; through the eucharist, the land and its crops are blessed. This icon is painted on glajă (manually made glass), and has its original frame, painted with șforț in two colours. The prevalent golden nuance comes from the use of gold leaves. The inscription reading “The Mystical Supper” is in Romanian, but rendered in the Cyrillic alphabet. 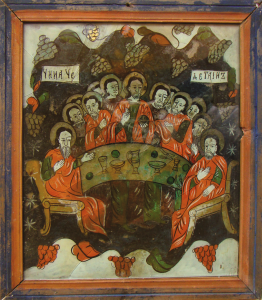 The icon blends autochthonous, Byzantine, and Western elements. The artist must have been a master, or someone who closely followed the pattern created by a master. The eucharistic message of the composition is confirmed by the rich grape vine motif which frames it. The figures, the gestures, and the elegance of the vestments echoes the hieratic ambience of Byzantine iconography. But the rhythm and the animated interaction between the figures denotes a strong Western influence. The red chromatic of the clothes stands out from the brownish-green background. While not all the faces are visible, some disciples appear to be engaged in lively conversation. Christ blesses with his right hand, while in his left he holds a globe marked by the cross—a symbol of the world of which he takes care as provident Lord. Original is the representation of the two seated disciples, at the opposite ends of the table. The chairs on which they sit bear the marks of baroque art. Theologically, however, these seats might suggest their apostolic authority, which became manifest at Pentecost, perhaps also their quality as judges in the complement led by Christ, at the final judgment. This icon was painted on glajă (manually made glass) and has its original frame, painted with șforț. The inscription, in Romanian, reading “The Mystical Supper,” is written in two white cases.

[Trans. from Romanian by D. Costache]