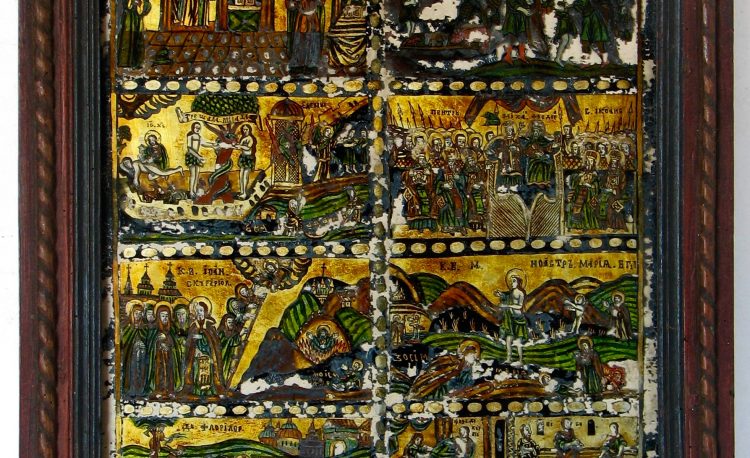 The icon presented here is found in the collection of the ASTRA Museum of Sibiu, Transylvania, Romania. It was painted in the second half of the nineteenth century by Simion Poienaru (1802-1872), a master painter from the village of Laz on the River Sebeș. Simion continued the art of his own father, Savu Poienaru (1770-1818), who established the Laz workshop that gave generations of talented iconographers, and which continues to this day (see here an interview with Master Florin Poenariu, posted on the AIOCS blog in April 2020). 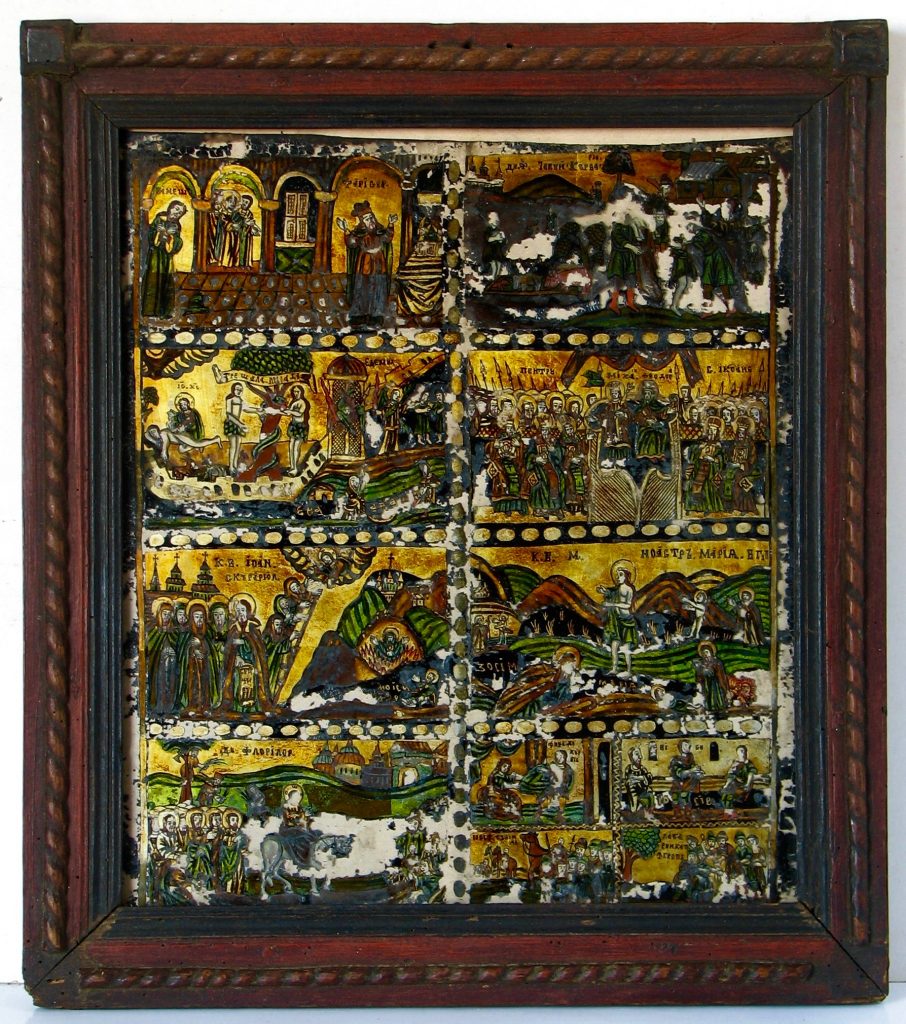 “Prăznicar” (festal icon) of the Sundays of Triodion and of the Great Lent, by Simion, master iconographer (zugrav) of Laz, Valea Sebeșului, the second half of the nineteenth century. The collection of icons and liturgical objects of the ASTRA Museum of Sibiu

The icon under consideration is a composition belonging to the genre of festal representations (in Romanian, Prăznicar). Its uniqueness consists in that it depicts several Sundays of Trodion and of the Great Lent, as well as symbolically alluding to the Holy and Great Week. The Triodion is the liturgical time of the year beginning with the Sunday of the Tax-Collector and the Pharisee, ending with the Holy and Great Week between Palm Sunday and the Paschal Sunday. Also called Triodion is the main liturgical book used throughout this portion of the year, containing hymns, prayers, and scriptural readings.

The author of the icon under consideration, Simion Poienaru, introduced the “festal” genre in the repertoire of Laz. The composition shows eight scenes painted on golden backgrounds and delineated by dark lines dotted with whitish-yellow spots. The artistic quality of the icon is obvious. The details are skilfully rendered in great detail. The chromatic palette of green, ochre, and grey shades against the golden backdrop is harmoniously balanced, inspiring stability and serenity. As such, the composition befits the interiorising drive of the fast, which invites spiritual exercises in preparation for the Lord’s Resurrection.

The icon has an explicit narrative character. It outlines scenes representing the following Sundays (from top left side down): the Tax-Collector and the Pharisee, the Return of the Prodigal Son (unfortunately very deteriorated), the Banishing of Adam and Eve from Paradise, Sunday of Orthodoxy, Saint John Climacus (combined with Moses’ vision of the Burning Bush and a depiction of Saint John’s monastery on Mount Sinai), Saint Mary the Egyptian, Palm Sunday, and, lastly, four scenes from the life of Joseph, son of Jacob Israel (Joseph’s virtue is remembered in the Holy Week as a prefiguration of the Lord’s sacrifice). Two Sundays are missing, of the Last Judgment and of Saint Gregory Palamas, very likely because there was no more room to depict them.

The eight scenes render patterns present in the xylographic illustrations traditionally included in the Book of Triodion. No wonder, there: Simion Poienaru was an ecclesiastical chanter and he must have contemplated those illustrations for years, till the idea of combining them came to him. By researching two editions of the Triodion, from Buzău (1700) and București (1746), I was able to identify the last, complex scene as representing snapshots of Joseph’s life. But even though the original patterns of the Sundays preexisted Simion’s composition, perhaps going back to Byzantine sources (as suggested by the golden background), the originality of this icon is unquestionable—another example of inspired creativity within the confines of the tradition.

[Trans. from Romanian and adapt. by D. Costache]