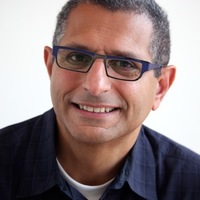 In July 2016, I travelled with family and friends to Jerusalem. It was my first visit to the Holy Land.  The Church of the Resurrection had, as one would imagine, a deep impact upon me. I was standing proximate to where Christ was crucified, buried, and resurrected! That extraordinary spiritual feeling, shared with my family and friends, is one that will endure.

Yet, whilst in this holy place, something struck me as incongruous. I had explored the Greek, the Catholic, the Armenian, the Coptic, and other sections, each one presenting the onlookers with a ‘piece’ of Christ, as it were. I could not help but feel that the One Body of Christ was divided! Instead of feeling depressed, I prayed that one day all Christians would be united. I sought recourse in happy thoughts, ecumenical thoughts, thoughts inspired by the writings of Fr Matta Al-Miskin (Matthew the Poor), a contemporary desert father (1919-2006) of Coptic (Egyptian) Orthodox descent. It is his views that I outline in what follows.

One of Fr Matta’s main traits was his ecumenical fervour. In his autobiography, he lamented the isolation of the Egyptian Church caused by the conflict that arose at Chalcedon. He also deplored the loss of the Greek language and hence the ancestral inheritance of the Coptic Church. Two hundred years after Chalcedon, the Arab invasion deepened our church’s isolation from the world and from its roots. Indeed, it led to the loss of the native Coptic tongue, rendering collections of invaluable ancient manuscripts worthless. Against this backdrop, ‘separation, fear, and ignorance’ led to ‘fanaticism […] and imprisonment of the mind, […] [limiting and controlling] all our relationships’. As Fr Matta noticed that the other Christian churches had their own reasons for parting ways, he believed that the time had come for all to put behind ignorance and apprehension, and to turn towards one another in love. For him, the lack of Christian unity signified a loss of the church’s plenitude. 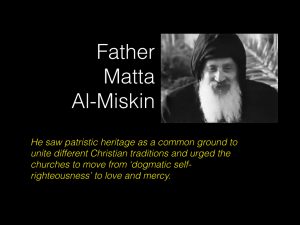 He reasoned that ecclesial unity could be achieved only if Christians broke away from ‘the barriers of hatred, the variance of thought, the discords of the soul, the inventions of the intellect, and the cares of the flesh’. Drawing on the Creed, he suggested that our faith in the ‘one catholic church’ denounces the current forms of ‘sectarian unity’. By the latter he meant the individual churches that think of themselves as ‘the whole body’, which is but a fanciful illusion. He saw patristic heritage as a common ground to unite different Christian traditions and urged the churches to move from ‘dogmatic self-righteousness’ to love and mercy. For him, the authentic church tradition was by definition ecumenical. In turn, when we ignore the church’s ecumenical vocation the division of Christ’s body is unavoidable. There are, and always will be, questions arising from any theological debates and ecumenical dialogues. However, as Fr Matta observed, love and mercy should be the forces that ignite our imagination.

I am aware that few fellow Copts would share my background. I am a Coptic Orthodox person with a Catholic mother and a Catholic upbringing in Muslim Egypt. I am currently a postgraduate student at a multi-denominational Christian institution and my supervisor is a Romanian (Eastern) Orthodox father and scholar. Thus, I could not help but connect with and relate to Fr Matta’s ecumenicism. It is his ecumenical openness that every church, every Christian leader, and, as a matter of fact, every believer, needs right now. May the spirit of ecumenism that permeated Fr Matta’s life and teachings enrich the world and bring all Christians to the One Christ.

Dr Wagdy Samir is a Coptic Orthodox layman and an AIOCS Director of Orthodox Studies. Holding a PhD in mathematics from the University of New South Wales, he is now undertaking doctoral studies at the Sydney College of Divinity in the theological and ecumenical contributions of Fr Matta Al-Miskin (Matthew the Poor; d. 2006). He worships at St George Coptic Orthodox Church, Kensington NSW.