I am grateful for The Revd Dr Josephine Inkpin’s gracious invitation to speak to you on this second Sunday after Pentecost, in the wake of World Environment Day (5 June 2021). I shall begin by pointing out that the traditions of the early Christians were very rich, offering wisdom for life in all its fullness. No wonder these traditions included a sense of wonder at God’s creation. We just listened today to a couple of scriptural passages that, whether we like it or not, point us in the same direction. Let me explain. 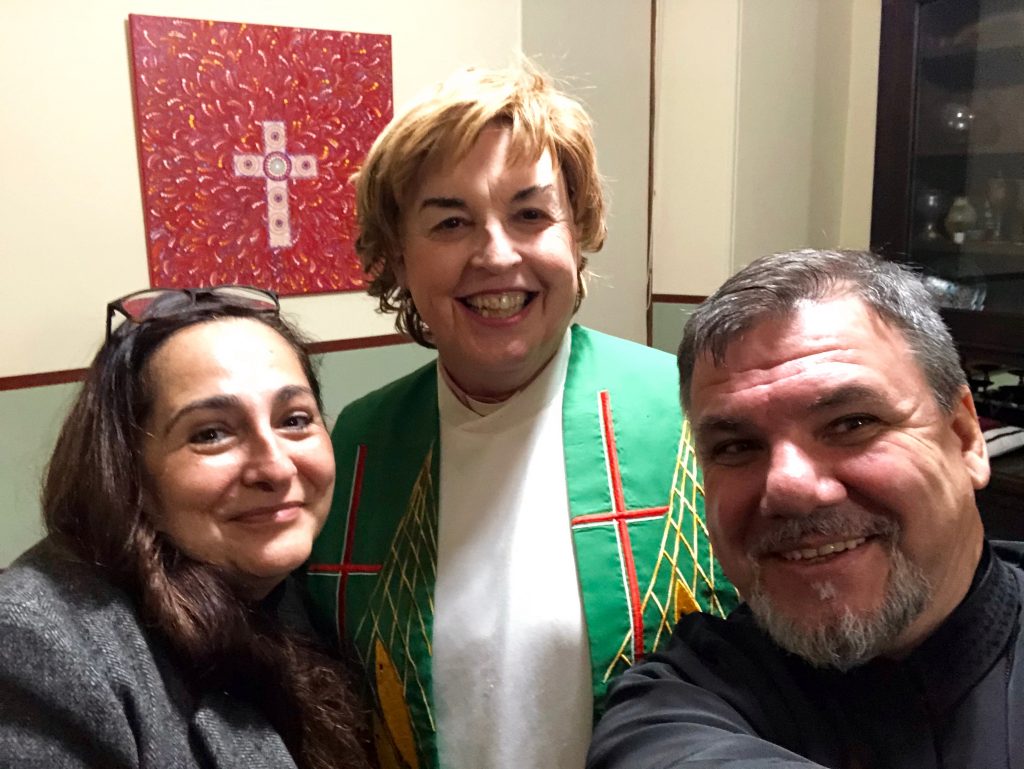 In the Gospel passage of Mark 3 (20-35), verses 28-29 read: “Truly I tell you, people will be forgiven for their sins and whatever blasphemies they utter; but whoever blasphemes against the Holy Spirit can never have forgiveness, but is guilty of an eternal sin.” These lines might mean a number of things, which suits me quite well. As we celebrate World Environment Day, I take them to mean that whoever ignores the Spirit is beyond forgiveness. This nuance makes sense when we think of the Spirit as “present everywhere.” One of the daily prayers in my own ecclesial tradition, Orthodox Christianity, refers to the Holy Spirit as “Heavenly king, Comforter, and Spirit of truth,” and calls the Spirit “the treasury of all good things and giver of life” who “is everywhere, filling all things.” As the Spirit fills all things, it is blasphemous to say that there is no Spirit at work in the world. At this juncture I must turn to the other scriptural passage we heard today, a verse from Psalm 104:30, which reads: “When you send forth your Spirit, they are created; and you renew the face of the earth.” This line brings to the fore the truth many people ignore, namely, what conditions the flourishing of the world is the Spirit’s active presence. It is true that natural energies—dark or otherwise—fuel creation’s movement, growth, and thriving, but its life also depends on the Spirit’s creative and renewing agency. It is this conclusion that the Creed of Constantinople (issued in 381) enshrines when it affirms the Spirit as “Lord, giver of life.”

All good and clear! At least this is my hope. Considering more closely the reasons that led the early Christians to conclude that there is no flourishing without the Holy Spirit, I believe that two factors were at play. On the one hand, this is what they read in the Scriptures. On the other hand, it’s what they found through contemplating nature.

In regard to the first reason, I shall give one example. From the beginning of Genesis (1:2), we hear that “the Spirit of God hovered over the face of the waters” of creation. Sometimes rendered as “a wind from God,” when we understand the Hebrew phrase rūaḥ ’ĕlōhîm through the lens of the theological nature of the narrative, it denotes the Spirit’s energy that permeates the creation. The waters, hammāyim, in turn, signify a vibrating, simmering state of the primeval universe, eager to give birth to the overwhelming complexity we now find all around us. In this light, the line here considered—“the Spirit of God hovered over the face of the waters”—denotes the Spirit activating the generative power of the cosmos. This, precisely, is the way two early Christian interpreters considered this verse. Seeking support in the Syriac version of the scriptural text, Basil “the Great” of Caesarea (d. 379) pictured the Spirit as a cosmic agent that, “after the image of a bird hatching the eggs, thoroughly warmed up and enlivened the nature of the waters, warming them inwardly by a living power of sorts” (Homilies on the Hexaemeron 2.6). This sentence confirms that the Spirit is actively present within the creation, boosting its natural potential to generate complex beings. Warming up the “waters” might not be quite the same with bringing the stuff of the universe to a simmering state, but we retain the idea that created nature is never isolated from the Spirit’s maternal warmth. By the way, given that in the Syriac language, corresponding to the Hebrew rūaḥ, “Spirit” (ruha) is feminine, my reference to the Spirit’s maternal warmth is perfectly justified.

The other early Christian interpreter whose wisdom I draw upon, here, is John “the Golden Mouthed” of Constantinople (d. 407). Referring to the same line in Genesis 1:2, he asked the following question:

What is being meant by this (scriptural) utterance, namely, “the Spirit of God hovered over the water”? I am of the opinion that it means this, that a living energy of sorts was present in the waters. Water was not simply unmoved; it was both moving and endowed with a living power of sorts. (Homilies on Genesis 3.1)

The agreement between these interpreters is transparent. John did not deploy Basil’s image of the nesting bird, but he meant the same when he compared the hovering Spirit with the energy present in the moving waters of creation. For both of them, there is no creation to speak of in the Spirit’s absence. It is to the Spirit, the giver of life, that we awe our existence. Our living and moving and having our being in God (Acts 17:28) is largely due to the Spirit’s ongoing “ecosystemic” agency. This is the reason why to ignore or to deny the Spirit’s activity within the cosmos is blasphemous and unforgivable.

It should not come as a surprise, therefore, that upon realising this truth of our existence the early Christians learnt to consider God’s creation through transfigured senses. Led by the Spirit, they saw beauty everywhere, that bespeaks God’s glory. As Basil exhorted his audience, “I want you to imprint within yourself an utmost sense of wonder for the creation, so that—irrespective of where you are and whatever plants you may be finding—they distinctly elicit remembrance of the creator in you” (Homilies on the Hexaemeron 5.2). They heard the harmony of things, that, as the Psalmist says, “the heavens are telling the glory of God” while “the firmament proclaims the work of his hands” (Psalm 19:1). Accordingly, with Clement of Alexandria (d. ca 215), they listened to “the pure song, the support of the whole and the harmony of all, that brings the universe to a harmonious measure” (Exhortation to the Gentiles 1.5.2). They read the world’s fitting architecture as though a book for, as Athanasius “the Great” of Alexandria (d. 373) had it, “knowledge about God can be gained from visible things. By its order and harmony the creation signifies and proclaims its master and creator as though through letters” (Against the Gentiles 34). They breathed in the air suffused by the Spirit’s presence, becoming living beings (Genesis 2:7; Ezekiel 37:5,10).

Such was the perception of life and the world of our ancestors in the faith! Spurred by the Holy Spirit, they opened their windows to life and to the world, through contemplating which they learnt how to draw in abundance of Spirit, the fulness of life. The lesson is straightforward, I guess: in order to live fully, we must learn from them how to wonder at the beauty of things, the Spirit’s dwelling place. It would be unforgivable not to do so, but not because we’d have an unforgiving God; it’s because nothing can absolve us for failing in life by dismissing the Spirit, the giver of life.