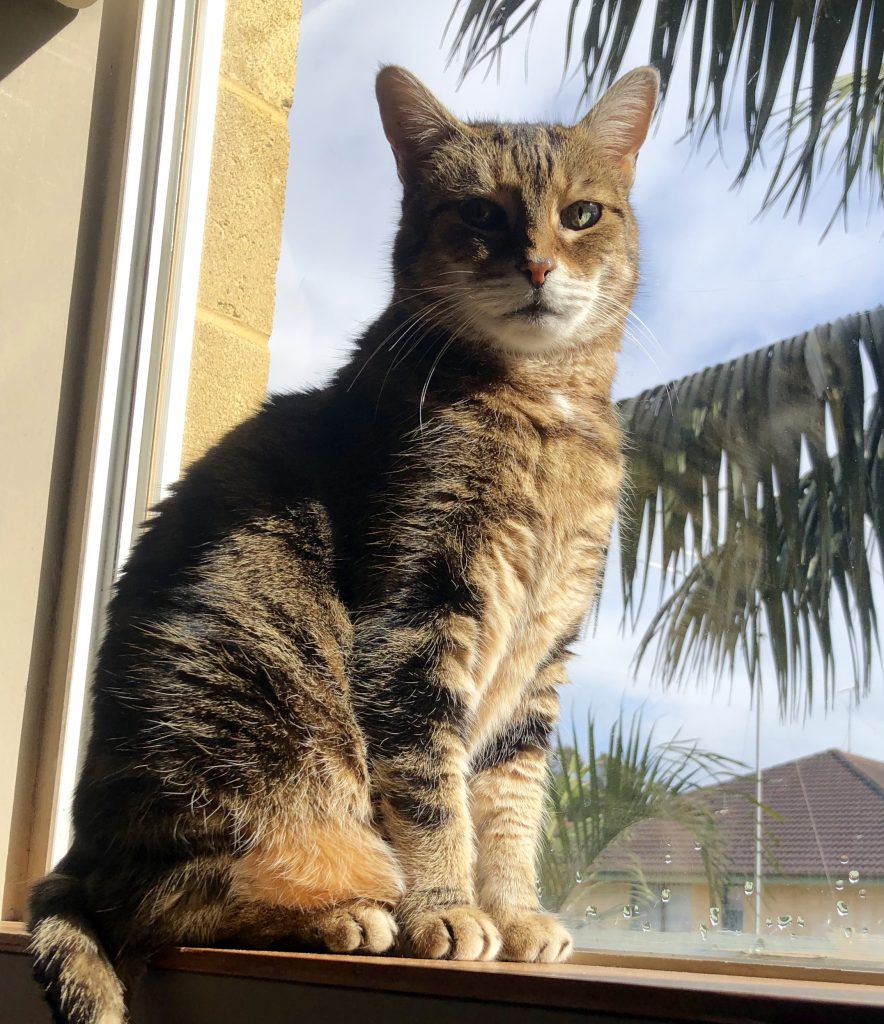 A year ago, we lost dearest Cookie. That’s that, some would say. There’s so much pain and loss and suffering out there, that the death of a kitty who lived a full life and reached ripe old age should not haunt anyone. That might be so, but that, I believe, is a heartless way of thinking about life, life that comes into being, thrives, and goes. Furthermore, the mentality of “that’s that” illustrates a way of thinking opposite to the Gospel’s message. It is especially surprising, therefore, when Christians exhibit the same kind of view. For hope points us elsewhere, beyond the senseless, irrational tragedy of death.

Let me explain. Without ever saying it plainly, the Scriptures suggest that—as God does not do anything without a purpose—there must be a purpose behind everything God does. So simple. Don’t laugh at the circularity of my train of thought. What God does is take care of the entirety of the creation, from the largest vistas of the cosmos down to the humblest of earthly lifeforms to the quantum infrastructure of the universe. Here’s a sample of how God dispenses providential care to the creation:

You make springs gush forth in the valleys; they flow between the hills, giving drink to every wild animal; the wild asses quench their thirst. By the streams the birds of the air have their habitation; they sing among the branches. From your lofty abode you water the mountains; the earth is satisfied with the fruit of your work. You cause the grass to grow for the cattle, and plants for people to use to bring forth food from the earth, and wine to gladden the human heart, oil to make the face shine, and bread to strengthen the human heart. The trees of the Lord are watered abundantly, the cedars of Lebanon that he planted. In them the birds build their nests; the stork has its home in the fir trees. The high mountains are for the wild goats; the rocks are a refuge for the coneys. You have made the moon to mark the seasons; the sun knows its time for setting. You make darkness, and it is night, when all the animals of the forest come creeping out. The young lions roar for their prey, seeking their food from God. (Psalm 104 [Septuagint 103]:10-21)

Moreover, in the absence of God’s Spirit nothing can survive, all things collapse:

When you hide your face, they are dismayed; when you take away their breath, they die and return to their dust. When you send forth your spirit, they are created; and you renew the face of the ground (Psalm 104 [Septuagint 103]:29-30)

Now, if God does not do anything purposelessly, then why would God keep breathing life into the creation and take care of its tinniest parts? Is it merely in order to postpone the death of mortal beings for some more years? But why would God do that? Is it merely to ensure that the individuals survive for as long as it takes for this species to survive, so that, in turn, this species contributes to the survival and thriving of other species that depend on it? And why would God do that if in the end all things anyway die? Is it not an awful waste of resources to support things to be and to live, merely to die another day? True, God does not think like us (Isaiah 55:8) and we should not ascribe to God rationalisations proper to our economy driven societies. Asking why God would waste resources to sustain existence and life destined to die out is impertinent. But there are reasons that compel me to ask again: why would God invest so much into a mortal creation if mortality is its final term?

This question, which from my viewpoint naturally obtains from the facts that precede it, might be difficult to grasp. We are accustomed to death and killing for our own survival. I don’t mean, here, our penchant for senseless killing and destruction; that’s demonic and makes us a lesser creation; I mean the fact of having to kill life in order to eat and live. My question might be even more difficult for Christians to grasp, since we hope in our resurrection and have the assurance of Christ’s love for us that transcends all obstacles. To us, other lifeforms matter less, if at all; their death comes natural to them; death is their lot. Is that so? Is this the purpose of God’s providence? And is this a genuinely Christian worldview? As Saint Athanasius tells us, humanity is “part of the whole as well as the rest,” inherent to the creation and a microcosm that enfolds within itself the nature of the universe (On the Incarnation 41). As such, Saint Maximus continues the thought, humanity shares in the death of the creation as much as the creation in its resurrection (The Mystagogy 7). And if humankind and the cosmos share both nature and destination, why does it seem to us so outlandish that the creation is called to immortality as much as we are?

The next logical question is: does this include individual nonhuman creations as much as it does individual human beings? I respond by another question. Since most individual human beings don’t deserve the title “human,” but are still destined to resurrection and immortality, don’t the little nonhuman sisters and brothers—innocent as they are of our meanness and depravation—deserve the resurrection and the life promised to the creation in its entirety? I believe that as grace vouchsafes for us, humans, the joy of the age to come, so providence is the promise of life for all of the creation—including for our dearest Cookie and for all her sisters and brothers who have ever brought and continue to bring so much comfort to us, unworthy siblings.

Acknowledgment The reflection develops the ideas I had run past my ISCAST colleagues on 1 August 2022, during our weekly devotion and shared prayer time.