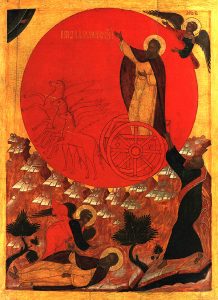 The month of July occasions for the Orthodox the remembrance of a Christian saint, Prophet Elijah (Elias) who lived before the Lord’s incarnation. Perhaps one of the most enigmatic figures in the entire Scripture, Elijah remains the image of the saint par excellence, whose life illustrates the paradoxes pertaining to the spiritual becoming as experienced by those who love God above all. In celebration of his memory, I will ponder a moment of his life, as depicted in 3 Kings LXX (1 Kings according to the Hebrew canon) 19:3-13, which is one of my favourite scriptural passages and highly relevant to any experience of awakening and renewal. Rendered in italics, the version offered below represents a retelling that combines the Septuagint and the Hebrew narratives. I simply write down my thoughts along the lines of the scriptural story, inviting you to come along with me on the journey…

Elijah was afraid and got up and went away for his life. When he came to Beersheba in Judah, he left his servant there, while he himself went a day’s journey into the wilderness.

When running for your life, or some other reason, no human help is sufficient and you distrust even your earthly side. Therefore, it is better to leave behind your servant, this body, and allow your inner self to stretch its morning wings and fly towards the Rock. Fly into the desert for a day’s journey. The desert, where there is no place to hide and no chance of disguising—the mirror in which you can clearly see yourself, alone and naked, before God.

He came to a broom tree, sat down under it and prayed that he might die. “I have had enough, Lord,” he said. “Take my life; I am no better than my forefathers.” Then he laid down under the tree and fell asleep.

The Tree, a symbol of revelation whose shadow casts upon you a fuzzy refraction of the enlightening truth from above… There, under the Tree, there is the best place in the world for expressing your fears, for shedding your tears… There you could pacify your senses and your mind, getting ready, waiting for the answer… Is it not interesting that Elijah did not seek to eat from the Tree? He was strong. He knew that the truth lies beyond the Tree itself. The Tree was just the foreshadow of another reality…

Someone touched him and said, “Get up and eat.” Elijah looked around, and there by his head was a cake of bread and a jar of water. He ate and drank and then laid down again.

If you do not eat from down below, a meal from above will be served. So, do not worry and focus on the quest. Why did Elijah fall asleep again? It is simple: an angel cannot be the answer. The angel is just the presentiment of the answer…

The angel of the Lord came back a second time and touched him and said, “Get up and eat, for the journey is too much for you.” So he got up and ate and drank. Strengthened by that food, he travelled forty days and forty nights until he reached Horeb, the mountain of God.

Elijah was right. The angel could not bring an answer though you might expect from an angel at least to tell you where to look for it… After so frugal a meal, and there is no need for more (Matthew 4:4), he proceeded for his journey. There is no journey without proper preparation: leave your servant behind (assume spiritual solitude), go into the desert for one day (look into your heart), rest under a tree (find the gate), do not absolutise the angels (focus on the quest, do not be disturbed by images or ideas), and eat (assimilate your findings, know who you are). Only after that you may move towards the most difficult part of the experience.

There he went into a cave and lodged there.

The cave, like a womb, represents the matrix of one’s rebirth (cf. John 3:3-7). In the cave there is always night, that inner face of a day, another powerful symbol of the mystery of one’s regeneration. Elijah voluntarily returned into his inner darkness (cf. Genesis 1:2), abandoning any previous knowledge and virtue, and becoming a foetus anew (a foetus may claim neither knowledge nor virtue) in the womb of his mother, the heart. For Elijah is the conscious side whereas the cave of his heart, the mother, is his subconscious—like in Annick de Souzenelle’s hermeneutics. The cave, the womb… Reborn by becoming humble (see 3 Kings 18:42), by acknowledging your ignorance, insecurities and weaknesses…

And the word of the Lord came to him: “Why are you here, Elijah?”

Only by renouncing your vanity will you be able to hear the inaudible. The Merciful One will come again to Adam, asking the most basic question of all: are you aware of what you seek? Do you know who you are? (see Genesis 3:9).

He replied, “I have been very zealous for the Lord God Almighty. The Israelites have forsaken you, broken down your altars, and put your prophets to death with the sword. I am the only one left, and now they are trying to take my life too.”

Always like Adam (cf. Genesis 3:10), Elijah was not yet fully aware of the meaning of his quest (see also the expression of his sorrow: I have had enough). His was not the proper answer to God’s fundamental question. This cannot come as a surprise though since, according to St Silouan the Athonite, even the saints can be wrong. Therefore, you should not despair when your own answers are inaccurate.

The Lord said, “Go out and stand on the mountain in the presence of the Lord, for the Lord is about to pass by.”

You willingly entered the cave and the darkness, but there is no knowledge/answer in your own humility. You accomplished your task, becoming humble and putting behind all prejudice. Now you are ready to receive wisdom from above: God is neither knowledge nor knowable. God is presence, God is alive—God is life in which to participate.

Powerful wind, earthquake, fire. All tree elements are violent, and you know what they are… They represent stages of the chaos and turmoil you consciously embraced when beginning to work towards your rebirth. But God is not to be found during the violent stages of your deconstruction. He will be there, at the end of your painful journey, where/when you will not struggle anymore, where/when, radically reconstructed, you will sit under the Tree, serene, joyful and grateful. The Comforter will come to you, gently caressing your heart, like the whisper of a soft wind.

When Elijah heard it, he pulled his cloak over his face and went out and stood by the cave. Then a voice said to him, “Why are you here, Elijah?”

Now he knew. He knew he was wrong when running for his life. This time, he was ready. After running for his life, after travelling through the outer deserts and climbing up the mountains, after facing the dark night of his soul, Elijah realised that the answer was already there, inside, under the Tree, where whispers were heard…

This is a revised version of a text originally published in The Greek Australian Vema, July 2009, 7. Image source: https://oca.org/saints/lives/2009/07/20/102060-holy-glorious-prophet-elijah