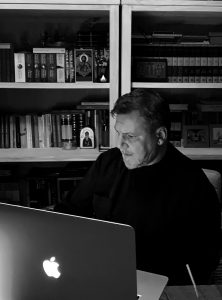 On 13 November 2020, upon the honouring invitation of His Eminence Ioan, Archbishop of Timișoara and Metropolitan of Banat, Doru Costache offered the keynote “Patriarch Abraham between Natural Contemplation and Divine Vision in Clement of Alexandria” (“Patriarhul Avraam între Contemplarea Naturii și Vederea Dumnezeiască la Clement Alexandrinul”) at an online conference. The main language of the conference was Romanian.

Gathering Orthodox theologians from around the globe, including a large contingent of Romanian scholars from abroad, the conference was held under the aegis of the Romanian Academy (Timiș branch), the Orthodox Metropolis of Banat, and the Western University of Timișoara.

It focused on the Theophania School, a topic mainly addressed by an expert panel of Romanian scholars chaired by Fathers Bogdan Bucur and Silviu Buntă. The “Theophaneia” panel was preceded by four keynotes and a number of shorter papers.

The abstract of Costache’s keynote

Clement is the first Christian author who discussed matters of knowledge seriously. For him, complete knowledge refers to both God and the universe. Contrary to the common view, Clement did not contemplate the creation for the sole purpose of transcending it in search of the divine vision. True, for him, knowing and understanding the universe lead to the creator. The reciprocal is also true, however, for knowing God becomes the perfect lens through which the “holy gnostic” contemplates the universe. The clementine gnostic is a Christian intellectual, equipped both morally and academically, able to research the creation rigorously, and also to understand it theologically and from the vantage point of the ecclesial experience. What sharpens the gnostic’s perception is her/his spiritual advancement. The more one becomes, the more one understands. The perfect gnostic exemplar is patriarch Abraham, in whom Clement discerned the complex figure of an astronomer and a theologian. One could aptly say that Abraham, the “holy gnostic,” embodies the entire clementine programme of progressing in knowledge and of becoming personally. This paper summarises Clement’s biography, bibliography, and reception, after which it discusses Clement’s system and its illustration, Abraham. It concludes by suggesting several lessons we could learn from Clement for the contemporary conversations between the people of science and the people of faith.