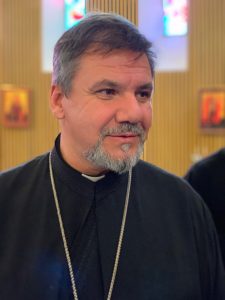 Among the many issues confronting the Orthodox in our days, one is the misunderstanding which refers to lay believers’ access to holy communion. Apart from some lay people’s inertia or indifference to holy communion, many circles promote the strange idea that God’s people has no need of communing in order to have fellowship with God. Other voices claim in the name of the holy tradition—an unsubstantiated claim, I should add—that there are different rules for clergy and laity in regards to communing. Thus, whereas clergy can commune without fasting and confessing, lay believers cannot approach holy communion without special preparation, including fasting and confession.

In what follows I point out that whoever teaches that God’s people should stay away from holy communion prove to be ignorant in regards to the apostolic and patristic tradition, even though their views might put on a form of piety. This piety is not completely unwarranted, since it draws attention to the need to reach personal compatibility with the holy communion. That said, the piety in question is completely misinformed about the Church’s traditional theology and practice. One of the functions of the divine liturgy is to prepare God’s people for holy communion so that, spiritually reestablished, the believers walk into the world as bearers of peace from above. The liturgy, namely, is the framework of our preparation for communing, which grants us all access to Christ’s body and blood, whether we are clergy or laity.

In what follows I present matters pertaining to the Church’s scriptural and canonical tradition, which highlight the ecclesial necessity of communing over and against all individual considerations.

Traditionally, the Orthodox Church regards the Lord’s sermon in John 6:22-69 as first and foremost about holy communion and only then as denoting other forms of divine fellowship. Here are the most relevant passages from this sermon:

I am the living bread that came down from heaven. Whoever eats of this bread will live for ever; and the bread that I will give for the life of the world is my flesh . . . Very truly, I tell you, unless you eat the flesh of the Son of Man and drink his blood, you have no life in you. Those who eat my flesh and drink my blood have eternal life, and I will raise them up on the last day; for my flesh is true food and my blood is true drink. Those who eat my flesh and drink my blood abide in me, and I in them. (John 6:61-56)

Christ’s words are straightforward: there is no eternal life without our participation in him through eating his holy body and without drinking his precious blood in eucharistic fashion. As we see God’s glory through the Lord’s deified body (John 1:14), we inherit life eternal through the same. When deprived of holy communion, God’s people are cut off from the gift of eternal life. The same idea transpires at the Mystical Supper in Matthew 26:17-30.

When, at the Mystical Supper, the Lord Christ established the New Testament (Alliance) between God and God’s people, he gave us as a sign of, and a way of participating in, the Alliance the holy communion (Matthew 26:26-28). He also encouraged us to repeat continuously what we saw him doing, that is, to celebrate the eucharist in the gathering of the faithful and to commune together in remembrance of him (Luke 22:19; 1 Corinthians 11:23-26). Consequently, each liturgy is that Supper and that Alliance. Without interiorising the Alliance through eating Christ’s eucharistic body and blood, we cease to be children of the New Testament. In fact, without communing together we cease to be Christ’s body, the Church. As Saint Paul teaches, “Because there is one bread, we who are many are one body, for we all partake of the one bread” (1 Corinthians 10:17). There is no Church without the liturgical gathering partaking of the holy communion.

True, the believers should be mindful of their sins and change their lives so that they commune worthily (1 Corinthians 11:27-32; 1 John 1:9), but ultimately no one is sinless (1 John 1:8). To prevent the children of the New Alliance from communing at the liturgy is justified only for serious transgressions, as a sign that they broke the Testament. It is up to their spiritual guide, their confessor, to decide the length of their excommunication (literally, to be deprived of holy communion). For lesser issues, the liturgy’s cleansing “mechanism” should suffice, above all since the holy communion is “for the forgiveness of sins.” Christ, as we know, did not come on earth for those who think that they are righteous; he came down from heaven for those who know that they are sinners (Mark 2:17).

In short, the scriptural evidence points out the ecclesial need of holy communion: the Church does not exist without the liturgical gathering communing. It also makes clear that, as a remedy and vehicle of life eternal, holy communion is part and parcel of believers’ restoration and revitalisation in Christ. Apart from believers committing serious transgressions, there is no reason to prevent the congregation from holy communion at any liturgy.

These conclusions find confirmation in the Church’s canonical tradition. The ecclesial norm is that all must commune, clergy and laity, at any divine liturgy. Only serious sins exclude people from this norm, according to the discernment of their confessors. Otherwise, what prevents the lay persons from communing is the same with what prevents the clergy to do so. No special treatments; the eucharist is what makes us one. But here are a few relevant examples.

The eighth apostolic canon shows that, if they do not have a serious excuse, the clergymen (bishops, presbyters, and deacons) who celebrate the divine liturgy without communing must be excommunicated. In like manner, the ninth apostolic canon decrees: “all the believers who enter the church and listen to the reading of the Holy Scriptures, but refuse to commune, must be excommunicated.” The implicit rule to which both canons allude is that all the members of the congregation, clergy and laity, must commune, so that God’s people are constituted as one body.

The second canon of the synod in Antioch conveys the same message for laity:

All who enter the church of God and hear the Holy Scriptures, but do not communicate with the people in prayers, or who turn away . . . from the holy partaking of the eucharist, are to be cast out of the Church, until, after they shall have made confession, and having brought forth the fruits of penance, and made earnest entreaty, they shall have obtained forgiveness.

Against this backdrop, the eleventh canon of the synod held in Sardica decrees that believers who miss more than three weeks from the liturgy, thus refusing holy communion, are excommunicated.

In the current state of affairs, the blame for keeping the lay members of the congregation away from holy communion falls on the clergymen who ignore the Church’s canons. To commune is not a dispensation granted by the clergy; it is the birthright of all the believers who had their lives renewed through baptism and the holy chrism, and who honour their Christian identity by faith and a corresponding way of life. The same conditions apply to the clergy. Preparation for holy communion should not become an excuse for opposing the ancient canons.

In short, the Church’s canons affirm the rule that the entire congregation should commune at any divine liturgy, apart from cases of great transgressions. There is no special treatment for clergy, who commune without confessing before each liturgy and who do not fast beyond the established days of fasting, Saturdays being excluded from fasting. The same rules are in place for laity.