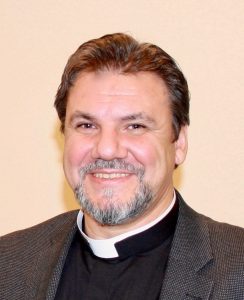 On 19 October 2018, Doru Costache presented the talk ‘John Paul II’s Veritatis Splendor (1993) and the Encyclical of Holy and Great Council of the Orthodox Church (2016): Shared Ethical Concerns.’ The presentation was for The Splendour of Truth: A Symposium on St John Paul II’s Encyclical Veritatis Splendor: 25 years on, held at School of Philosophy and Theology, The University of Notre Dame Australia, Sydney (Broadway campus).

As the title of the talk makes plain, he compared the two documents, focusing on their respective ways of dealing with the impact of contemporary culture upon the ecclesial experience and way of thinking.

The introduction to the talk:

Often and for a good reason, commentators have noted that whereas Western Christianity was quick to realise and consider the challenges posed by the modern, brave new world, Eastern Christianity proved to be far slower in its reactions. There is no point in arguing otherwise. A series of factors conditioned, and still do, Orthodox Christianity’s slowness to respond to contemporary challenges. For one, its eschatological and transcendent figure proved to be a double-edged sword. This figure kept it out of the maelstrom of any rushed desire to fit in the nontraditional narrative of our time, but at a cost: it lost track of time, so that the last major overhaul it has undertaken was with reference to the nineteenth century nationalist ideologies, which have become its narrative ever since. Another factor is, of course, its geographical position, traditionally the Orthodox Church being confined to lands where the brave new world itself has penetrated slower than in the west, making impossible an earlier encounter. No wonder therefore that, against this backdrop, only more recently did Orthodox Christianity arrived at grasping some of the challenges of our time, through the reflection of the Orthodox living in the west. In turn, the Roman Catholic Church was there from the outset, witnessing the emergence of modernity. Getting quicker its historical bearings than Eastern Orthodoxy, it engaged a critical conversation with the brave new world from very early on. For instance, it held two major councils in modern era, where it assessed the impact of modernity on Christian faith and life. John Paul II’s Veritatis Splendor continues this conversation on ethical grounds, preceding by more than two decades the concerns recently expressed in the Encyclical of the first major gathering of the Orthodox Church in modern times, the 2016 Holy and Great Council of Crete. In my talk, I look at the ethical dimension of the two documents, pointing out how, despite the historical and cultural gulfs between the Roman Catholic and the Orthodox Churches, both encyclicals illustrate similar concerns about the moral dilemmas of our age.

Audio recording of the talk.