Under the patronage of His Eminence, Metropolitan Basilios of the Antiochian Orthodox Archdiocese of Australia, New Zealand and the Philippines, on 25 August 2019 The Good Shepherd Orthodox Church organised its second annual seminar, Exploring Orthodoxy. Alongside His Eminence, other contributors to the seminar included The Revd Fr Geoff Harvey, parish priest of The Good Shepherd, and Protopresbyter Dr Doru Costache. The three talks were be preceded by matins, the divine liturgy, and lunch. An icon demonstration and a book stall were be also available. The event was open to people interested in Orthodox Christianity, Orthodox and non-Orthodox alike.

The day was inaugurated, as the tradition instructs, with vespers in the eve of 25 August. On the seminar’s day, while matins was performed in the Main Chapel of Monash Religious Centre, Mrs Joanne Ball introduced the non-Orthodox participants into the meaning of the liturgy, in the adjacent small chapel. The liturgy, presided over by His Eminence, surrounded by Father Geoff, Father Claudiu Moruțan (Romanian Diocese), and Deacon Nicholas, was beautifully chanted by the choir of the parish. About two hundred people attended, Orthodox and non-Orthodox alike. Lunch was sumptuous and the Welcoming Team, lead by Mrs Joanne Ball, proved to be both professional and solicitous. The seminar was opened by Father Geoff’s talk, ‘Making the Commission Great Again: Orthodoxy for Australians!’ During the talk, members of the parish were invited to describe their faith experience at The Good Shepherd. Their testimonies were followed by D. Costache’s talk, ‘Charismatic Experiences: The Philokalia‘s Burning Hearts.’ The day was closed by the keynote of His Eminence Basilios, ‘Introduction to The Philokalia: How it helps spiritual renewal and how it has influenced modern Orthodox spirituality.’ The event occasioned people to have a taste of the Orthodox experience at its fullest: by way of prayer, teaching, and fellowship. A day to remember!

Check out the offical page of the seminar. See also Father Geoff Harvey’s report on the event.

The Good Shepherd Orthodox Church is located in Clayton, Victoria. All services are in the English language and the divine liturgy is held in the Main Chapel of the Religious Centre at Monash University, Clayton Campus, conveniently located in the centre of Melbourne’s residential area. Religious Centre, 38 Exhibition Walk, Monash University; Wellington Road, Clayton, Victoria.

Charismatic experiences signal God’s presence in the midst of the believers. One such experience has its first documentary record in Luke 24:32. According to the evangelist, the disciples realised that, while the Lord was with them, their hearts were burning. The sceptics might take this reference as an empty metaphor. But for the philokalic tradition and literary antecedents such as the fourth-century Spiritual Homilies, the metaphor is not empty. Hearts do burn in the Lord’s presence, as a prelude to glorification. In this talk I focus on select passages from throughout The Philokalia which describe this charism. These passages, I propose, map and authenticate an experience which is not infrequent today.

The preparatory paper can be read here.

Here is the video recording of his talk (credit: Otilia Costache)

His Eminence and participant clergy. 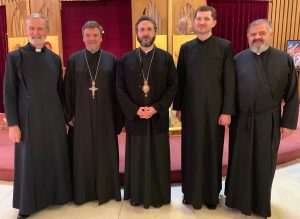